“Give thanks in all circumstances, for this is the will of God in Christ Jesus for you.” -1 Thessalonians 5:18
Because it’s hard to put daily life into words, here are the top ten highlights of the past two weeks:
1) One weekend I was home alone with the girls–no Gogo, Titi, or Rachel/Kiley.  So I decided to make the most of it by baking homemade cookies and writing encouraging notes to each girl.  We also did a music video to “Turn Down for What,” which ended up being incredible!  My girls can dance! (If you haven’t seen this video, check it out: https://www.youtube.com/watch?v=WEzsGcWdML4) We ended the night watching Charlie and the Chocolate Factory, and a few girls who stayed up late watched videos from my La Crescent students!
2) I caught a stomach bug and was sick for a few days.  While I was sick I stayed with Rachel and Kiley at a missionary family’s house, so when I returned to the girls home, they came running up to me with lots of hugs.  Melissa tenderly rubbed my back as a hello, how are you?  Sebe said they prayed for me.  And Lucia, after seeing Melissa rub my back, proceeded to do so herself. So sweet!
3) After settling Tenele into Project Canaan, it was rough figuring out what to do with her kids and how to arrange keeping them at the home.  Gogo and Titi both stepped up immensely in taking care of the kids with me.  Luciano continues to steal my heart, as I rocked him to sleep the first four nights Tenele had been gone.   A few days later I also took Luciano and Lucia to town with me to get them some shoes since they both had grown out of anything we had at the home.  Good thing Ayanda was with me, because we had picked up groceries, too.  So we trekked through town, Ayanda carrying our load of groceries and Mama Kate carrying Luciano on one hip and holding Lucia’s hand.  Lucia, thrilled with the opportunity to be out and about in town, sauntered painfully slow, looking at and touching everything she could.  It got to the point where I had to scoop her up for a few minutes because Luciano was waaaay too heavy to keep carrying for that long.  We were a hilarious sight as we had to keep stopping to catch our breath and shift our strength.  Apparently, many people asked Ayanda if we needed help (which I didn’t catch because it was in SiSwati).  It was a joyful “mama” day. 4) Musa treated Titi, Gogo, and I to Nandos, as we talked about our plan for the girls home and how to care for Tenele’s kids.  We felt like princesses as he catered to our desires and gave us more than plenty to eat and drink. It was just a really nice time for us to be away from the home together.  Thanks to Rachel and Kiley, they got babysitting duty that night. 🙂
5) We have been continuing a new Bible study structure so on Mondays/Wednesdays, Rachel, Kiley, and I are leading a study on the lineage of Jesus, starting with Adam and of course ending with the life of Jesus.  We are only at Abraham!  On Tuesdays/Thursdays, the girls take turns leading the study themselves.  They usually just pick a verse or reading that means something to them and they explain it and why it’s important.  Well, one night, I heard a lot of noise and commotion, so I went into the living room and found the girls all standing in a circle starting to sing and dance in worship!  It was such a proud mama moment because I hadn’t told them it was time for bible study, like I usually have to do, they started it on their own and they started it by uniting in song and dance.  Amazing!
6) I established a structured reading time into our daily schedule.  We have lots of donated books but they were not being used, so I structured a half hour reading time every day into the current schedule.  The girls love it! Nonhlanhla and Ayanda are eating up the Boxcar children series!  (Anyone have the rest of the books in the series?  We have 1-3 and Nonhlanhla’s already asking for the latter ones!)  Learning to read and speak in English is so important here because it will give them greater opportunities for appropriate jobs later.  During reading time, it’s also an opportunity for me to work on English pronunciation and frequency with individuals.  I tell them that since there’s an “umlungu” living with them, there’s no excuse to speak poor English. 🙂
7) I finally had my first basketball game with my “SuperLadies” women’s team!  They had been family to me a couple years ago when I lived here for the nine months.  I cannot begin to tell you how blessed I feel to call them a family again.  It felt amazing to play a game that I once loved but haven’t played competitively for years!  So refreshing to reignite the love for bball again. We won 56-18, and the second half I felt on fire!  Most of my girls came with to watch the game, so they were screaming and cheering.  After the game, thy all gave me running hugs even though I was covered in sweat.  It was a moment I won’t forget! Nomvula’s highlight at dinner was watching the game.  Guess I’ll have to build a basketball team out of these girls in our home. 🙂
8) Communication from home is always a highlight for me: I got letters from Maria Lusk and my cousin Kaci Keleher; I got phone calls from Eilidh Duncan all the way from Scotland, from Fr. Joe from Peru, and from Ally Adamski; finally, I got to skype with my mom, who was babysitting my nephews and niece, so I got to see them, too!  Thank the Lord for keeping my heart full from home.
9) For Rachel’s birthday, we hiked Execution Rock, using our own directions instead of buying a map.  (Who would charge you for a map when you already have to pay to hike?? Eish, charges for everything!)  Because we were using our own directional senses, we made it to the top, but only after we nearly hiked up a different mountain first.  We had a little picnic of PB sandwiches, fruit, and Kiley’s yummy granola bars her parents sent from home!  We took some pics and headed back down the mountain for a cold coke and ice cream bar.  On our way out, we saw hippos, alligators, and zebras!  Zebras were the one animal Rachel really wanted to see, so she got her wish on her bday!  Our missionary friends, the Macs, hosted us for a bday dinner at their house.  What an incredible and hospitable family. 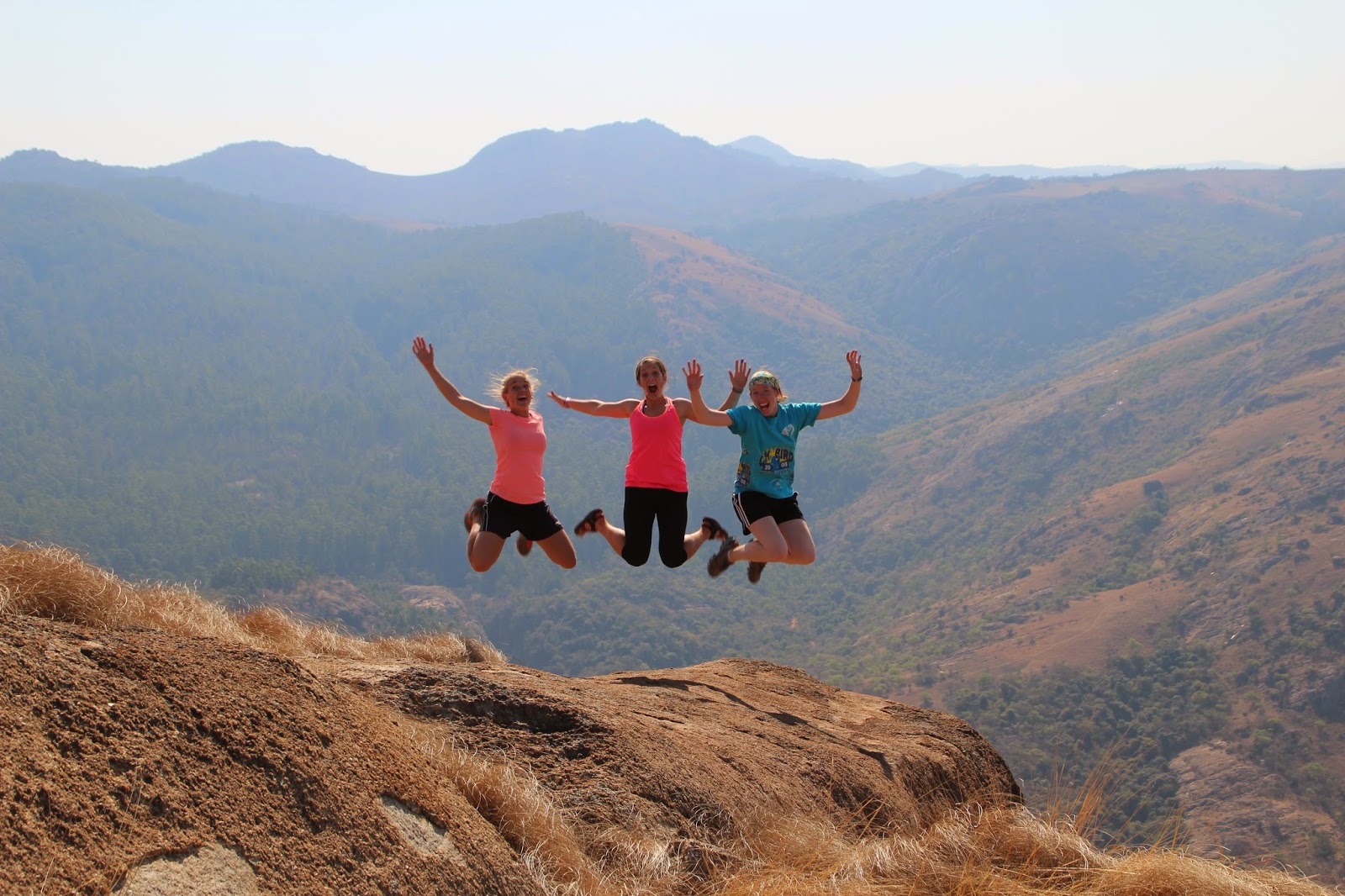 10) Just this past weekend, we had a divine appointment from the Lord.  I was supposed to go to South Africa to play in a basketball tournament.  A day or two before we were supposed to leave, the tournament got cancelled, and Rachel, Kiley, and I were crushed because we were really depending on a retreat and get away from Swazi for a little while.  Besides, Kiley had booked a return ticket home that weekend to be home for her brother’s wedding.  So the three of us decided we needed to get to SA anyway and spend some time away.  We didn’t know how we would get there or where we would stay.  We were over at Elysa Mac’s house (this woman is like our angel here!) and we asked her if she knew of any cheap accomodation.  She decides to facebook message her friends and ask.  It just so happens that Susan Clark is online, sees the message, and offers her home for FREE.  What?  From there we were able to communicate briefly and confirm we’d be coming to stay with her for one night.  (This is less than 24 hour notice.)  So our friend Mancoba drove us to SA where we settled in with Susan Clark and her family.  Susan and her husband Randy have been in SA for three years and just made the decision to remain her permanently.  They have adopted five children, and even though their house was already hosting another family, they still squeezed us into their home and gave us incredible hospitality!  They took us to their Awana ministry, their baby home ministry, and to see an overlook of the beautiful city.  They fed us butternut squash soup, salads, chicken, pancakes, sausage, french toast, and more. Talk about a taste of home, yum!  Susan has been invested in my Tenele story and our mission in Swaziland ever since she came to visit a few weeks ago, so it seemed only necessary for me to ask her to be my spiritual mentor.  From there came questions and advice, lots of prayer and encouragement.  Let’s just say, I received answers from the Lord I had been praying for, and received His excellent provision through the Clark family and the company of Rachel and Kiley.  After our too-short-of-a-getaway in Pretoria, Rachel and I (since Kiley’s home for a bit) are empowered for the new weeks ahead!